SPOILER ALERT: This review contains spoilers, including a discussion of the (absolutely predictable) ending of Mandy. Proceed with caution if you haven’t seen Mandy, or go watch it yourself first (but don’t spend too much money doing so).

This is what I remember: Nicolas Cage in a bathroom. His pants are gone, and he’s wearing some sort of yellow shirt, which is covered in blood because the cult-leader stabbed him in the side with a knife that should’ve been big enough to ensure us that he, Nicolas Cage, really shouldn’t be moving around as much as he is in this scene. Cage seems to be handling the situation well, although I should probably call him Red, since that’s the name of his character. Red, pantless, stabbed, witness to the recent and gruesome burning of his lover, and locked in a bathroom, produces a bottle of vodka from a cabinet, takes a few swigs, and begins screaming.

On second thought, I simply have to call him Nicolas Cage rather than Red, because this scene is just so damned Cagey it’s destined for inclusion in some future YouTube “Nicolas Cage’s Worst Acting Moments” compilation video (you know, right there alongside pretty much all of Deadfall and The Wicker Man’s “not the bees!”). The scene, in short, is brilliant. This is the part when that satisfying sense of “now this is what I came here for!” really kicks in.

Which isn’t to say the movie is worthless up until the bathroom scene. The slow-burning beginning, complete with lush forest scenes filtered through Mandy’s trademark hallucinated wash of red and blue (Suspiria anyone?) seems pretty damned promising. The dialogue is a hazy mess of half-glimpsed memories and LSD-fueled rambling, the cult members are truly unsettling, and oh, there’s a motorcycle gang of metal-armored cenobite things you just know Cage is destined to battle. At this juncture (that is, up to the bathroom scene), my passion for Mandy’s delightfully surreal B-movie vibe just about equals our buddy Cage’s for torture scenes. 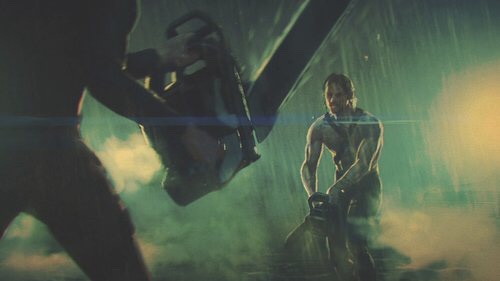 So what’s this movie about? Basically, Cage… er… Red’s girlfriend, Mandy (Andrea Riseborough), has snagged the eye of Jeremiah Sand (Linus Roache), a freakazoid cult leader with ties to the cenobite biker things that seems to be centered around drugs (hallucinogens, specifically). Sand gets his goons to subdue Cage and snatch Mandy so they can feed her the “chemist’s best,” (one part LSD, one part sting to the jugular by a giant wasp they keep in a jar of liquid). Mandy trips, Sand shows her his penis, and she laughs. Predictably, this pretty much kills Sand’s buzz, so he orders his cult to kill her with fire in return. Cage gets a front-row seat to the whole event before they finally leave him to die. It should come as no surprise that he’s able to free himself from his bonds and hand-craft a wicked solid steel battleaxe in his forge before departing on a revenge mission which promises to be like no other. All this happens within the first 45 minutes or so.

God, I wish it were that easy.

I wanted to like this so bad it hurt, especially during the scene where Red goes to his friend’s trailer (the friend is Caruthers, played by Bill Duke) and gets entirely filled in on the legendary history of the Black Skulls (the above-mentioned cenobite-biker-thing gang) by way of a supposedly “incidental” conversation. Caruthers even gives Red their location. That’s right. All the integral aspects of Red’s revenge plan are conveniently provided in a short, hamfisted dialogue that seems cut and pasted from the script notes to save someone the effort of revealing things in a more interesting way. Sloppy? Fuck yes, but that wouldn’t have been enough to sink entire the ship.

After the disheartening Caruthers dialogue, Red spends about three seconds searching for the Black Skulls. In essence, there’s no “hunt” for the demon bikers at all, despite the fact that Mandy has delightfully taken its time up to this point. Red kills one of the Black Skulls with a crossbow, then gets captured… again, and when he wakes and breaks out of his bonds… again, he makes surprisingly quick and easy work of these scary-looking monsters before heading off to hunt the human element of the Children of the New Dawn cult. “Wow, that was quick. Surely you skipped something…” you say. Actually, I didn’t. Compared to the first part of the movie, the revenge scene progresses in a sloppily brisk-paced series of predictable and rather unimaginative kills.

Yes, I really do “get it”–this movie isn’t supposed to be polished squeaky clean. As I said at the beginning of this review, Mandy promised to play to Cage’s worst impulses, and I readily acknowledged and applauded this bold aim. Make no mistake, Red’s revenge scenes are definitely cringeworthy, and if I’m going to be completely honest, I did enjoy the animated shorts of Mandy that appear intermittently throughout the second half.

Still, cool visuals and Cage killing people isn’t enough for greatness. It feels like the second half of this thing literally had no script. Even worse, Mandy fell into two devastating plot miscalculations that could’ve been easily avoided. Caruthers, as I mentioned, shouldn’t have furnished the whole backstory in one fell swoop. Much of the film’s tension revolved around the mystery of the Black Skulls who seemed to materialize in the forest only with the initiation of an occult ritual. Having some random character whose sole function is to explain the whole thing away the moment Red hints that he’s had a rough night was a bad idea, since it evaporates that much-needed tension in a strikingly uncreative way.

Above all, Red shouldn’t have killed the Black Skulls first. I get that Red had to kill cult leader Sand last, but shouldn’t a gang of cenobite-demons decked out in Gwar-level heavy metal armor have been end-of-level “bosses” protecting Sand rather than easily-disposable grunts? Given the narrative tension generated by these things, this misstep is truly unforgivable. Again, it would’ve been so easy to have Red kill the human cult members first (who don’t pose any additional difficulty to Red, despite the fact that he faces them last) and to face the obscure Black Skulls in a final encounter that Mandy tried so hard to build up to during its earlier scenes. As it stands, unfortunately, Mandy expends all its narrative power right at the onset of Red’s revenge, and the rest of the movie drags along on a whimpering limp.

Ultimately, I’m glad I didn’t give into my impulse to buy this thing before watching. In a discussion at IndieWire’s Sundance Studio, director Panos Cosmatos says that he’s working against the “Tyranny of Perfection,” which he defines as the need “to be seen as utterly precise and perfect or seen as a failure.” Cosmatos goes on to say that he likes “rough edges on things,” and I don’t see anything inherently wrong with this. Particularly in horror films, rough edges can lend an endearing quality to a film that might have been forgettable otherwise (big fan of The People Under the Stairs, here), and that’s exactly what I expected (as I’ve repeated ad nauseum now) with Mandy. In this case, at least from a writer’s perspective, the latter half of Mandy feels less “rough” than rushed and underdeveloped.

Yeah, rough edges are cool, but effective storytelling is vital. Almost anything seems to go as long as you tell a good story. At least when plotting your narrative arc, no one will fault you for striving for perfection.