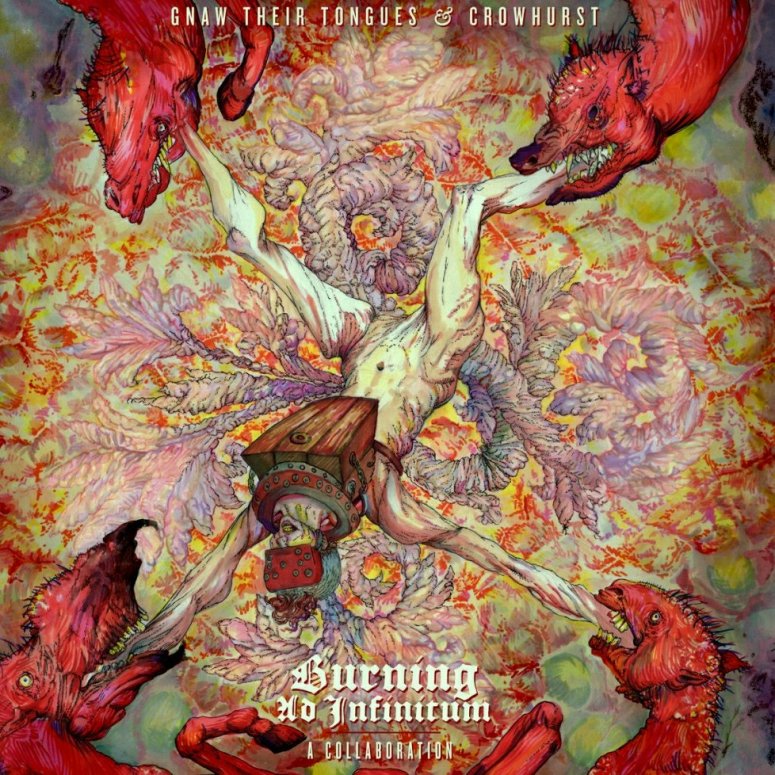 The fifth angel, who poured out his vial upon the seat of the beast; and his kingdom was full of darkness; and they gnawed their tongues for pain, And blasphemed the God of heaven because of their pains and their sores, and repented not of their deeds.

As melodramatically chilling as the above quote from Revelations may be, it doesn’t fall short in encapsulating the mood of Maurice de Jong’s (AKA “Mories”) musical project, Gnaw Their Tongues. If I ever get around to following up on part I and II of my list of “darkest albums,” Gnaw Their Tongues will definitely find themselves represented. The only reason one of their albums isn’t featured there now is the same reason I’m dreading this review. Some music is simply impossible to represent with words.

Raw. Hellish. Torturous. Oppressive. Soul-crushing. We can begin with adjectives like these, and they do some degree of justice to Burning Ad Infinitum, Mories’ 2018 collaboration with Pennsylvania’s ultra-prolific Crowhurst. The problem, of course, is that these would also describe every other album under the Gnaw Their Tongues banner, as well as the little I’ve heard, so far, of Crowhurst (this album being my introduction to Jay Gambit’s work).

As usual, this isn’t quite black metal, although Mories’ roots clearly extend in that direction. There are a few actual blast beats towards the end of the album that do suggest a more rooted, less ambiguous sonic structure much closer to standards of traditional metal. Nevertheless, much of what we get here is industrial noise, dirty drones, and sonic darkness. And there’s nothing wrong with this, particularly if your cup of tea is utterly bleak soundscapes.

Don’t get me wrong; I love Gnaw Their Tongues. I follow Mories’ developments on Bandcamp like most people have been keeping tabs on the Eminem and MGK beef lately. I was absolutely ecstatic to receive Burning Ad Infinitum for review, and would’ve purchased the damn thing anyway if I hadn’t. Still… now that review time is actually here, I can’t help but wish the potentially fruitful team of Gnaw Their Tongues and Crowhurst had left something a little more remarkable behind.

Maybe I’m simply desensitized a bit to the power of Mories’ sonic assault. If you haven’t heard Gnaw Their Tongues, this might be a perfect place to begin. To my ears, however, there simply isn’t much here to differentiate Burning Ad Infinitum from previous albums. Sure, it’s dark, brutal, and insane, but perhaps not as downright disturbing as Eschatological Scatology or Per Flagellum Sanguemque, Tenebras Veneramus. I hate to leave you with the “if you’ve heard one…” adage, so I won’t. But there’s something about this album that’s a little bit too much of the same old thing, if I’m truly being objective.

Personally, I’m regularly spinning this album anyway. This is one of those moments where I have to actively work to counteract my enthusiasm as a fan with the level-headedness of a critic. If I wasn’t a die-hard devotee of Mories, I probably wouldn’t see much here that bears repeated listening. While all Gnaw Their Tongues albums are a bit amorphous and difficult to conceptualized after the actual listening experience, Burning Ad Infinitum seems to emphasize the “forgettable” aspect of dark/noise/ambient a little more than usual.

I’m not intentionally neglecting Crowhurst here. I’m simply not certain how this release compares to the rest of their massive discography since my exposure to them is very limited. It wouldn’t quite be fair to equally accuse them of “more of the same,” given that I haven’t quite developed the context.

This album is still due to appeal to fans of both individuals. It might even prove a gateway drug, due to the album’s relatively brief running time, for new listeners to lose their way in the dark and twisted underworld of black metal inspired noise populated by musicians like Mories and Gambit. It’s definitely worth a listen; just don’t expect anything dramatically “new” or “cutting edge” in relation to the Gnaw Their Tongues discography.